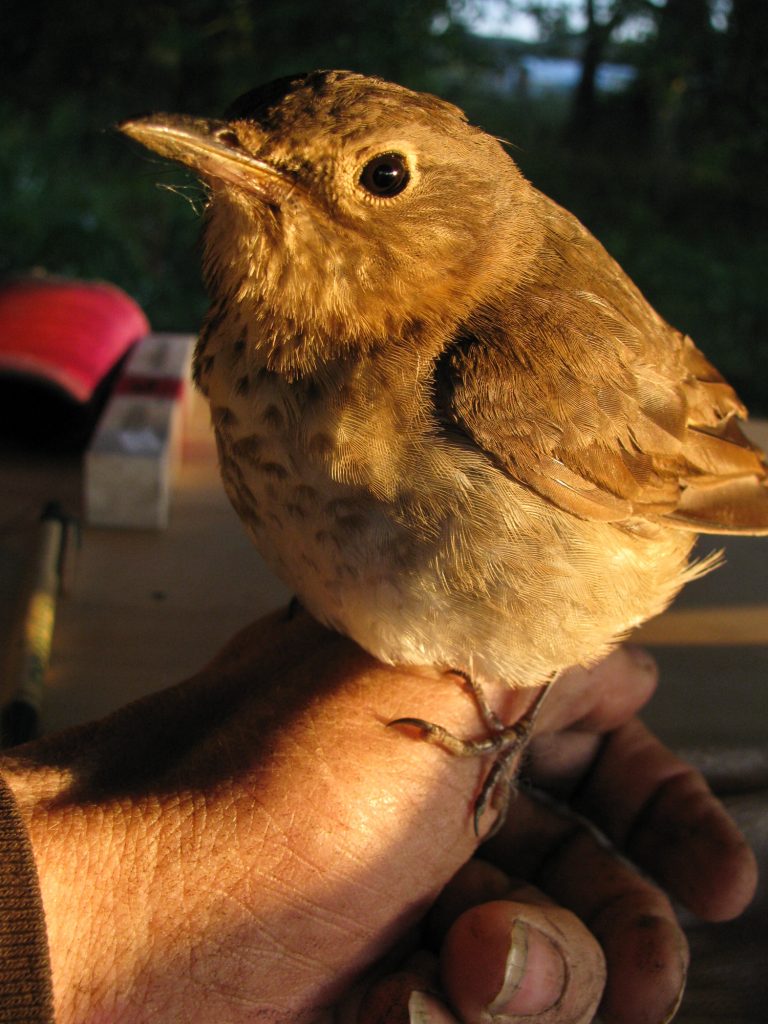 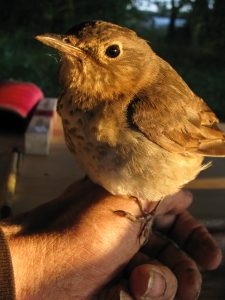 A bird came and sat on my hand long enough to take a photo.

The whole of existence is a flowing energetic stream that is self renewing and regenerating. In contrast to the common perception of an inert mechanical universe, creative, intelligent potential is its very essence.

Sometimes, when you have a stream flowing through the landscape, some of the water flows into a side pocket. When the water level of the stream drops, that side pocket can become a small pool, cut off from the rest of the stream. Cut off from the flowing stream, that isolated pool becomes stagnant and can even become foul smelling and unsafe to drink.

This is what has happened to humanity. Disconnected from the broader stream of Life… Nature’s community… humanity is stagnant and out of balance. Everywhere we look, we see toxic pollution and disharmony… both of the outer environment and in the inner landscape.

As long as people see themselves as outside and above Nature, the putrifying stagnation that humanity is experiencing will increase. Efforts through our own agency and doing fail because they carry the alienation from the broader community of Nature that is the source of the problem.

Natures community is sentient, diverse, inherently sane and creative. There is a common language of being that all creatures share. This common language and heritage is forgotten in the modern society. Only in individuals here and there, and in some indigenous communities is there still a conscious living connection.

As the mind started to lose sight of the intrinsic intelligence of Life, it spawned idea structures that reflected its growing disconnection.

First was the idea that divinity resided in heaven, separate from the world. This made the earth, the material, a mundane place and the intelligent source no longer immanently available. The next step, was that there is nothing at all beyond the mundane mechanical universe. With that idea, existence has no voice and it becomes nothing more than a chalkboard for humans to write on.

Humanity has a shared consciousness with all of Life. Only a psyche that has lost sight of that shared consciousness, can see existance as a mechanical system. This central imbalance and the pain of this disconnection has pushed humanity to seek replacement for what is forgotten.

The internet and its current favorites of Facebook and Twitter are very popular. Though driven by commercial gain, they are also an effort to re-create something that is always there but has been lost sight of. The whole of Nature is the real world wide web. From the trees, birds and mycelium, to the rivers, clouds and stone, There is an intelligent sentient web of shared consciousness and depth knowledge. The web of Life is aware and awake and carries far more than some inert ones and zeros. The internet is a crude and colorless simulacra by comparison.

The small bird (photo above) that came to visit and sat patiently on my hand while I took a couple photos before flying off, is one of the myriad voices in Nature speaking to humanity… a symphony of voices speaking about the need for humanity to re-discover its connection to Life… to re-join Nature’s community.

However, humanity has become confined to a tiny frequency in the broad spectrum of Life. This tiny sliver of wordy ideation, the compulsion of the mind, has come to so dominate the consciousness, that hardly anything else can be perceived. What other frequencies that are perceived, are almost instantly pulled into the conceptual process and used by the mind. It takes a keen awareness to see the gap between perception and the minds compulsive use of it.

The corporation today is the outer expression of this inner characteristic. The corporation knows nothing but consuming anything and everything in the name of ‘profit’ and that is how the mind works as well. It is the mind which is the originator and source of that pattern. The moment it encounters some other vibratory pattern, it is immediately using it for its own ends. There is no space for anything else to have its own expression, life and destiny.

This is the antagonistic relationship of the modern mind. It is a pointed irony, that the stagnant pool, having forgotten it is the same substance as the stream, is at war with it. All of Life is composed of the same substance, so to be at war with Life is to be at war with oneself. Look around and everywhere we see people full of guilt, self-judgement, insecurity, anxiety, full with tension and turmoil. Hardly anyone can still still for even 5 minutes and have their mind simply be quiet.

Whether it is an individuals stress and anxiety or the bigger social problems we collectively face, they cannot be addressed by the mind and its isolated, narrow functioning. It is the mind which is the cause, not the solution. It is only by re-discovering our living connection with Nature’s community that we can find an integral wholeness and balance… individually and as a society.